Blade slots are part of the Marvel Super Heroes Progressives and offer many unique features such as bonuses and free spins when they are earned on a single spin. The winning jackpot is 8000 times your wager on the slot. If you come up with a vampire and a Blade together you get five free spins. This game is usual with graphics that have to do with vampires and such. The tools for hunting vampires are spread out over nine paylines and include items like garlic and crosses. This slot game offers a different slot experience that is for sure. Watch Video 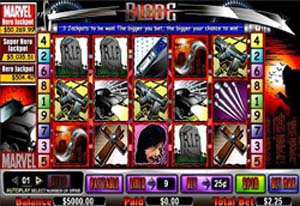 Captain America has been a popular super hero for some time. Marvel has now incorporated him into a slot game where the player fights his enemies. The game features a possible 20 paylines with a five-reel configuration. Wagers can be one cent to five dollars with a possible payout of up the 12,500 times the wager. The Captain Marvel logo operates as the key to bonus rounds and a payoff multiplier. There are scatters also that can help the player win a payoff. Captain America has become a popular slot game with players due to all of its extra player schemes. Watch Video 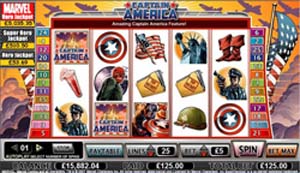 If the slot player is lucky enough to get three Daredevil logos on any of the five reels the bonus kicks in. Part of the reason for this games catching on is the many possibilities that are part of the game. There are three separate jackpots, which a player can use the wild logos and scatters to capture. Daredevil animations are eye catching and add to the game’s other attractive features. This is a slot favorite for many online players. Watch Video 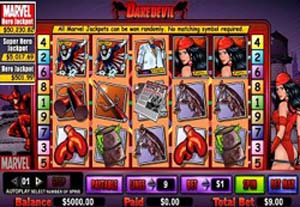 Get three Electra logos scattered on any of the five reels and the Ninja bonus game is activated. Elektra is another Marvel character that has become the basis for a video slot game. Elektra is the love interest of the Daredevil. As with many of these multi-coin wagering slots the more you wager the more you can win if you get lucky on one of the 25 paylines. Watch Video 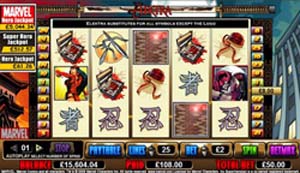 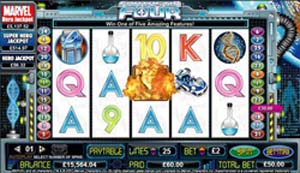 Another Marvel comic character becomes the theme of this progressive slot game. A player can activate the 3 bonus rounds by capturing it on one of the 25 paylines. The animation on this slot game makes in particularly intriguing. The Marvel jackpots have ranged between $5000 and just over $25,000. The more you wager the bigger the payout. These slots are programmed to payout over about two hour periods, which make them very friendly to players. Watch Video

To capture a bonus game, the player must capture three scatter symbols on any one spin. The bonus game is in addition to the payout for getting scatter symbols. The top payout is 5000 times your bet, so the larger the wager the bigger the win. The green Hulk can be thought of as a prediction of capturing some real green in folding money. Watch Video 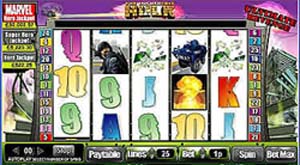 Three Iron Man symbols scattered on any of the five reels will activate a bonus round. When you play the bonus round you get five chances to find the blueprints behind the windows of a building. Since you have five chances, you can win more than once. The Marvel jackpots so far have ranged between $5000 and just over $25,000. Watch Video 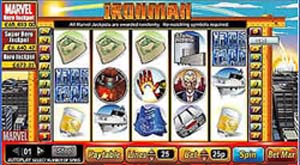 The max payout for a win is 3000 times your line bet. Free spins are activated by when you get the Silver Surfer logo on reels 2 and 4 without the Galactus symbol on reel 3. The free spins will continue until Galactus shows up on reel three. The Marvel jackpot is when captured has paid between $5000 and just over $25,000. Watch Video 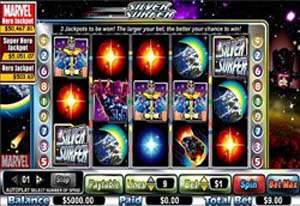 Marvel’s famous Spiderman has made it to the video slot games and like other slots from Marvel, bonus games can be activated by capturing three Spidey symbols. Cryptologic has another winner on its hands with this super hero slot which adds further too its growing list of Marvel super heroes. Watch Video 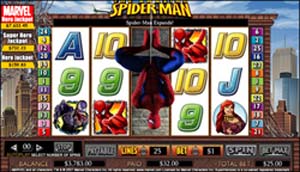 A player needs to capture three or more Radiation symbols on any of the reels at the same time. The range of Marvel jackpots on these slots falls between $5000 and $25,000. This slot game is based on the comic hero the Incredible Hulk, which allows a player to play multiple games at once and thereby increase the chance of winning on each spin. Watch Video 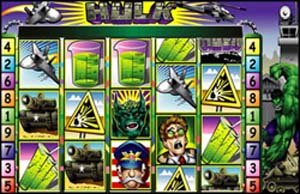 The Punisher has three random jackpots that can be won on any single spin. The addition of bonus games and free spins makes this game player friendly. Capture three scatters symbols on any line, left to right, and the bonus game is activated. The free spin is captured when the Punisher logo appears on reel one and five. The maximum payout is 5000 times the wager amount. Watch Video 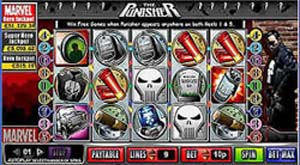 Three or more Thor symbols scattered on any of the five reels will give the player 10 free spins and the winnings on any of these free spins is tripled. The marvel jackpots range between $5000 and just over $25,000. The more coins that are played per line the bigger the payout. Watch Video 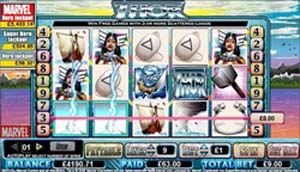 If a slot player can get three of the Wolverine symbols to show on any given spin the re-spin is activated. The bonus game is launched when three Sabretooth symbols are captured. In both of these situations the player stands the chance of increasing their winnings. There are also three distinct jackpots that are part of the possible payout from this progressive slot. Watch Video 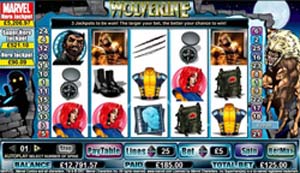 The X-Men slot game is another that comes to the gaming world from Marvel comics. If the X logo comes up three times on any one line, the bonus game is brought into play. While there are no free spins with this game, the bonus feature gives ample room for a player to come away with a tiny sum. The maximum bet on this slot game per spin is $45. Watch Video 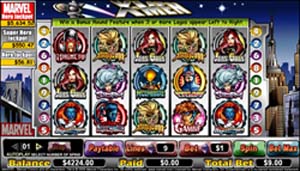