NetEnt, formally known as Net Entertainment has showcased their upcoming video slot for release. This new slot is called “Pyramid: Quest for Immortality” and will take place within the ancient Egyptian world. Pyramids, secret mythical creatures and more shall as will big wins. 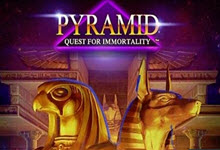 This new slot is developed as a 5 reel, 720 way to win casino game. The Egyptian theme is present with every spin made in this game. There’ll be various pharaohs and creatures that’ll be shown off to those who play this slot, making them feel as if they’ve just entered another realm. This realm also holds win multipliers, wild symbols, collapsing reels, re-spawning wilds and a bonus round. Visually in the background two of the Giza Pyramids lie in the background, on the reels all the various creatures and pharaohs will make an appearance, greeting you with big wins in the process.

This slot is slated to be released on October 5th, 2015. It’ll be available at all online or mobile casinos which have licensed out the Net Entertainment platform. Those whom wish to gain more information on this new slot only have to go to the Net Ent YouTube Channel, a video of this casino game has been posted for fans to enjoy. There is no word as of right now if this slot will be providing a large jackpot win or a progressive jackpot win. In order to find out punters will just have to experience this video slot for everything that it has to offer.