One gambler has been able to win a life altering amount of money while playing the Playtech developed video slot “Queen of the Pyramids”. This luck gambler was able to trigger a $223,404 progressive jackpot while playing this slot, one of the largest to be won throughout the entire year. Unfortunately the largest win triggered this year was $321,556.

This lucky player was enjoying this slot at Betfair when they saw five of the pharaoh symbols appear across the five reels. It is at this moment when the progressive jackpot is instantly won. The winning player stated, “At that moment I was in complete shock, I looked up and saw how much the progressive was and nearly lost my mind. I’m not sure what the future holds for me now but whatever it is I doubt it’ll be boring.” 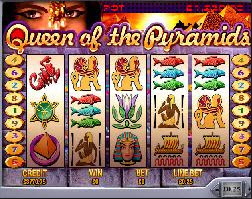 Those wishing to try their luck at this video slot will be met with a 5 reel, 9 payline video slot based around the Ancient Egyptian time period. While spinning the reels the Eye of Ra, Pyramids, Fish, Scorpions and much more make an appearance. Some of those icons will portray wilds and scatters to enhance a player’s opportunity to trigger large wins.

It’s required that an account be registered with an online casino that supports the Playtech platform before this video slot can be enjoyed, a valid payment method will be required upon registration. This is the ninety first time that this progressive jackpot has been triggered since the slot was released back in December, 2006. Who’ll be the next big winner?